Braving the elements on Dunmail Raise, an exposed mountain pass between Grasmere and Thirlmere, is the yellow and black Automobile Association ‘sentry’ box number 487 that has stood its ground for eighty three years.  If only the box could talk; what a tale it would have to tell of desperate motorists stranded in vile weather, seeking help and shelter, and of the knights in shining armour who came to their rescue.

Initiated in 1912 these wooden boxes originally served as cover for 950 patrol men who travelled by bicycle: the first of many forms of AA transport.  At one time there were around 800 “lighthouses of the road” for which members were given a universal key in order to access a telephone and other emergency items like a fire extinguisher, maps and even fuel.  Their numbers quickly identified the location of the stranded motorist, which enabled speedy attention. 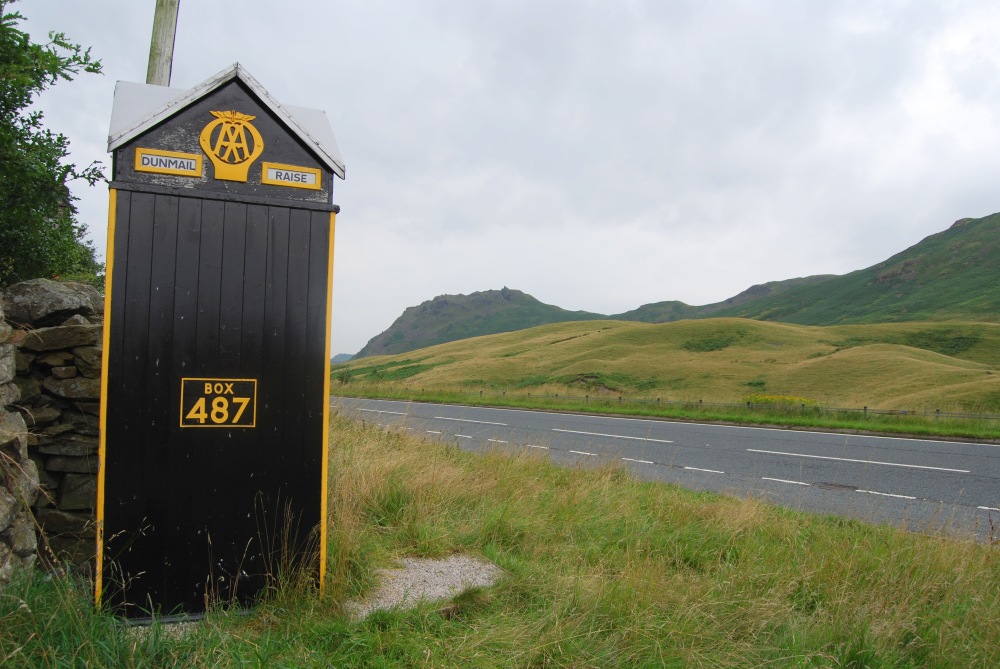 No further traditional boxes were erected from 1953, with pedestal telephones gradually coming into use from 1968.  After 2002, with the advent of mobile telephones, the necessity for roadside ‘phones diminished altogether.  A definitive list from the 1960s shows there were eighteen AA boxes in Cumberland and Westmorland.  Number 487 is the sole survivor.  It is also one of only nineteen remaining boxes in the entire country, eight of which are Grade II-listed.  They are owned and maintained by the Association, or other organisations, although many are now in museums or private hands.

Prior to 1896 locomotives were subject to a speed limit of four miles an hour with a government proviso that a person must walk in front carrying a red flag.  After 1903 the speed was raised to 12mph and motorists became prey to over-enthusiastic police hiding in hedgerows and ditches using stop-watches over a measured furlong.  They were scathingly termed “hedgehogs”.  The most severe fines imposed equalled a month’s average wage and, in some cases, four weeks in jail.

Anti-motorist fever spread throughout the country’s police force, which prompted a group of motoring enthusiasts to assemble at London’s Trocadero Restaurant on June 29th 1905.  From that momentous gathering was born the Automobile Association.  Initially its main aim was to help drivers avoid speed traps, warning them about the places in which police lurked.  Unfortunately prosecutions ensued for AA personnel issuing these tip-offs, but a solution was found.  Whilst they’d always saluted passing members they used the ploy of not saluting, so that a member read this as a sign to be on their guard.

Initially there were a hundred subscribing members but by 1914 there had been a phenomenal rise to 83,000 motorists availing themselves of the AA’s comprehensive services throughout the country.  Today the figure has reached 15 million.

It was commonly believed that the adoption of bright yellow as the AA’s house colour was in deference to its one-time Chairman, the Earl of Lonsdale of Lowther Castle whose livery colour prompted his title The Yellow Earl.  This wasn’t true; the AA were already using it by 1910 for a variety of their features, such as AA scouts’ armlets and village name-plates.  It became a particularly apt colour for the roadside boxes, since yellow is easily identified.

Geoff Roberts of Keswick began a career as an AA Patrol Man in 1988.   It lasted almost eighteen years and he enjoyed every minute.  “Although I already had experience in the motor trade it wasn’t easy getting appointed by the Automobile Association so I felt particularly fortunate to be doing an interesting job that surpassed all my expectations.  Frequently we’d arrive on the scene to find members really distraught;  like mothers whose keys were in a locked boot, making them late for the school run,” says Geoff.  Through their skills and dedication he and his Cumbrian colleagues waved their magic wands over broken down vehicles whose drivers and passengers often ran the gamut of emotions.  “It was the patrol men who built up the service,” continues Geoff.  “We embraced the work and its traditions, often labouring in weather conditions that were appalling and downright dangerous at times, but we achieved a high level of job satisfaction through giving a service in which we took great pride.”

Ten years ago, to celebrate the Association’s centenary, Geoff donned a 1960s AA uniform and set off on a 1960s BSA M21 Sheffield motorbike and sidecar that he’d restored to commemorate the AA’s centenary.  He drove the motorbike on a 100-mile journey during which he raised money for Cancer Research. 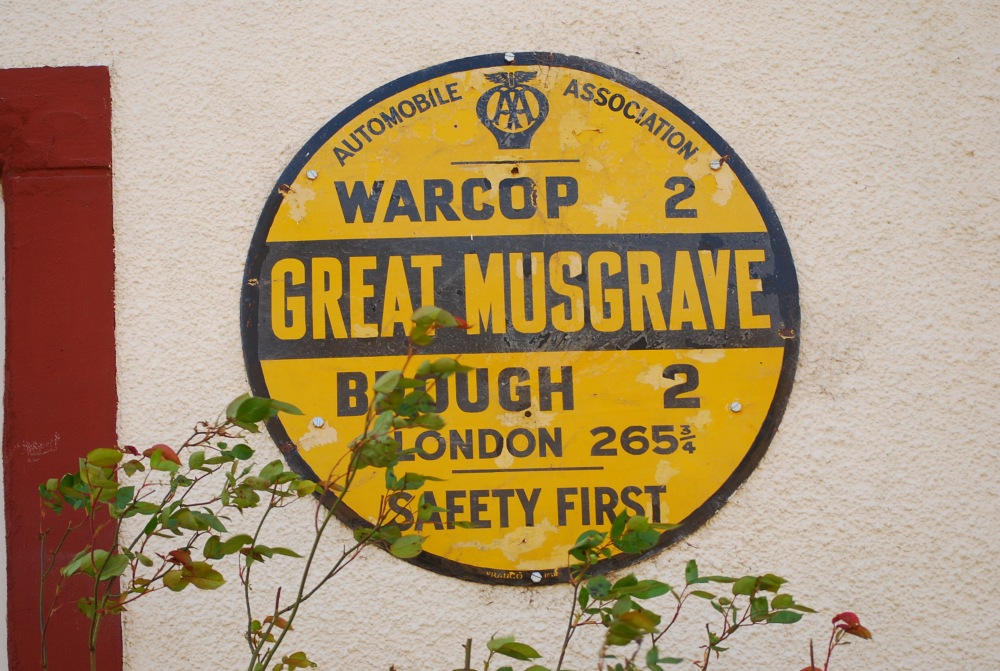 The AA offered name-plates to every town and village in the country, although not all of them took up the offer.  They bore the mileage to London, and distances to the nearest settlement in either direction.  During WWII they were a threat to security in the event of enemy landings and were removed and stored away for the duration.   Many were never reinstated and not a few were sold off over the years.  Geoff acquired those of Braithwaite, Portinscale, Edenhall and Newbiggin near Temple Sowerby.  In addition he used to own the Plumpton box number 313 that was located on the A6 north of Penrith.

Ulverston resident Mike Heath had reason to be thankful for the AA’s services back in 1965.  He must have tired of the old chestnut about not wanting to be seen dead in a hearse, but when the 1935 Straight 8 Packard model broke down in Patterdale he was very much alive and thankful he wasn’t an undertaker with a body on board.  With Mike were Bob Townsend, a fellow apprentice fitter for British Rail in their home town of Swindon, and their girlfriends Barbara and Gillian – whom they later married.  In order to economise Mike and Barbara bravely slept in the hauntingly beautiful hearse with its cut-glass windows. 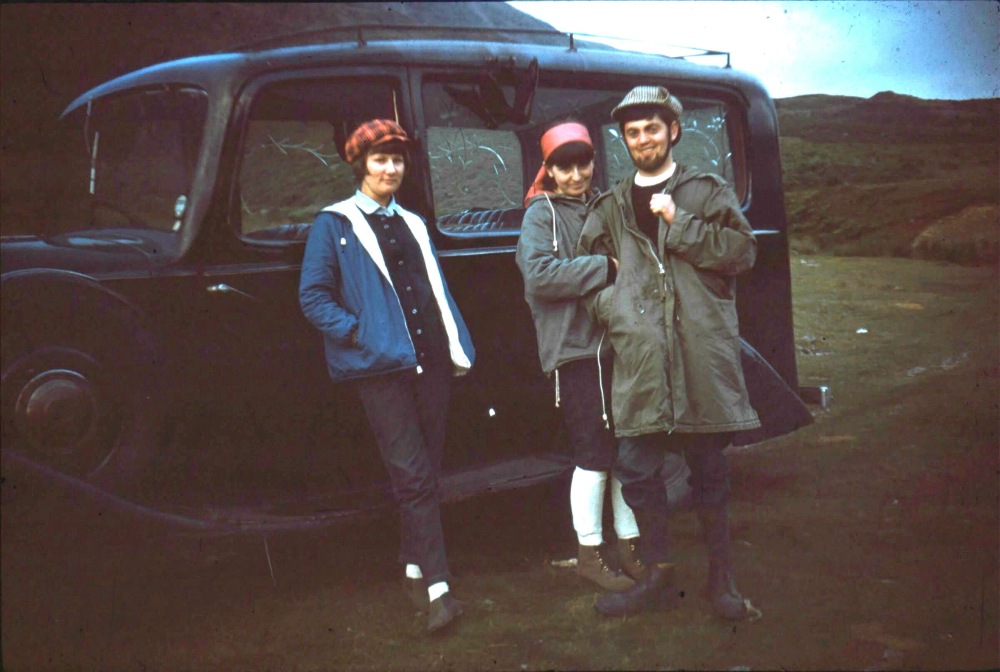 The car began coughing and spluttering as they motored over Kirkstone pass and when it finally conked out a knight in shining armour, in the guise of an AA man, happened to be passing and arranged to have the hearse towed to Ullswater Garage at Glenridding garage for repair, so long as Mike joined the organisation.  Little did the young man know, as he waited for the coil to be replaced, that before long his vehicle might trigger off a pop song that still ranks high in the list of all-time greats.

The smooth ride felt like drifting off to heaven but the 100,000 miles on the clock and a petrol consumption of 10mpg prompted him to advertise it for sale in the Exchange and Mart for £40, which was what he’d paid a few months earlier.

“Someone called Pete Townshend rang to say he was interested in buying the Packard and could I pick him up at Swindon station”, says Mike.  “Although he mentioned he was a member of The Who his name meant nothing to me.  The group had only formed in 1964 and their sort of music wasn’t in line with my taste anyway.  I was giving Barbara a lift part of the way and when she got out Pete asked if my girlfriend had been impressed when I’d told her who we were meeting.”

Barely had Townshend left Mike’s house than he was back in a taxi.  But there was no need for the AA this time as Mike knew how to get the conked-out hearse going again and Pete was soon his way.  That was the last he saw of the legendary guitarist and lyricist.

Stories abound online about what happened next but all share the common theme that Townshend wrote My Generation in a temper on a train heading from London to Southampton.  The reason he wasn’t driving the hearse was because he’d parked it outside his house in Chesham Place, situated between Buckingham Palace and Clarence House, and the Queen Mother had ordered it to be towed away.  Apparently the sight of it brought back unhappy memories of the funeral of King George V1.  The figure for recovery was £250.

On October 29th, only a few months after Pete had bought the hearse, My Generation was released and reached number two in the UK charts.  It has won many accolades, including being placed 13th VH1’s list of the 100 Greatest Songs of Rock & Roll.

The Who celebrates its fiftieth anniversary this year and Pete Townshend reaches the age of seventy.  It is said he’d already started writing My Generation when the Packard went missing but he altered the lyrics from the original version to reflect his anger at the injustice.  Whatever the truth, the hyphenated punctuation of certain words in My Generation is very much in line with the theme of the film The King’s Speech, in which Colin Firth admirably portrays King George V1 as he tries to conquer the most overwhelming stammer.