If anyone is leaving their mark for posterity on Cumbria, and other points of the compass, it is Shawn Williamson.  At the moment he is creating an amazing trail of rock sculptures around the Low Wood Bay Resort and Spa.

Shawn was a seaman on the Great Lakes of North America in his youth, but returned home to train as a stonemason, carver and then a sculptor, ultimately graduating with honours and becoming a Fellow of the Royal Society of Arts.  He works out of Troutbeck but has previous long-term bases in West Cumbria and the Central Lake District.

He was already established as a professional when, at the age of twenty four, he met the international sculptor Josefina de Vasconcellos MBE, by then an iconic octogenarian who lived in Langdale and died aged 101.  As a young woman she had studied under Antoine Bourdelle at the Académie de la Grande Chaumiére in Paris.  Through her tutelage and mentoring over a period of twenty years, Shawn came to see the influence of Bourdelle – who had been assistant sculptor to the great Auguste Rodin – in his own work.

A man of grit and determination, with a driven personality, Shawn clearly means business in all he undertakes.  His production of a wide variety of commissioned and imaginative work has materialised through his passion to be creative, combined with physical and spiritual strength in sculpting all manner and sizes of sculptures.

At Low Wood his skills have been tested because of the nature of the material with which he is working.  He reckons the type of extremely hard rock at his disposal has never been sculpted in this fashion before.  Slate boulders, some of which are two million years old, came to light during a £16 million extension by English Lakes Hotels Limited at Low Wood, one of a quartet of their luxury 4* hotels and a 5* country inn, all located in the Lake District and the North West.  So geologically important is the site that an Archaeological Watching Brief was carried out to ensure no damage was done to the boulders throughout construction processes.

On the boulders, weighing between one and two tons, Shawn has created such delightful visions as a fox, badger, leaping trout, swan, Herdwick lamb, owl, heron, red squirrels, otter and perch.  There will be twelve in all when the series is completed.

Within Michael’s Wood, an eleven-acre site to the south of the hotel, an irregular five-ton block of stone features the face of English Lakes Hotel founder, the late Michael Berry OBE with his faithful dog and company’s mascot, Sam.  “The challenge here has been to create a direct portraiture into the stone, after the fashion of traditional sculpture,” says Shawn.  Chairman and managing director Simon Berry is impressed:  “The carving is so life-like. It’s almost like seeing our late father set in stone.  Appropriately the boulder is placed at the start of a walk through the wood which we planted eleven years ago in memory of dad. It runs to about ten acres just south of the hotel grounds and through to Holbeck Ghyll.”  When the project is complete, later this year, visitors and hotel guests will be welcome to follow the trail of sculptures along the lake and through the grounds and a children’s adventure map will be produced.

Shawn is well known for his involvement in the mentoring of young people including the long-term unemployed and community groups.  His guidance in the practical and artistic work of carving in stone has helped many youngsters acquire permanent interests and employment, as well as giving them a purpose and sense of value in what they achieved.

“Back in early 2000 we created a unique initiative for the Workington community,” says Shawn.  “It was called Cumbria Rock Sculpture which I formed with Sean Cullen and Richard Chambers, both talented creators.  It enabled ninety young people to train and develop artistic and manual crafts to acquire work and further training. We produced many sculptures with local carboniferous limestone, including those for the Tern Project and the Cycleways Network. We went on to larger schemes, one of which was involvement with recent American Presidential candidate, Senator Bernie Sanders of Vermont, with  their ‘9/11 Friends across the Atlantic’ programme”. 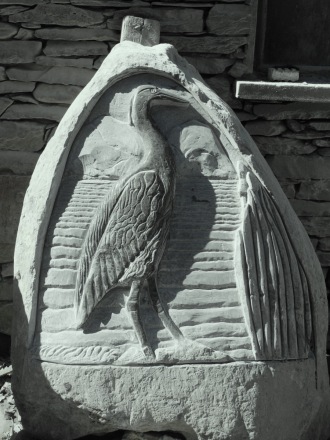 Heron on the Lowwood Sculpture Trail . Maggie B Dickinson and Shawn Williamson 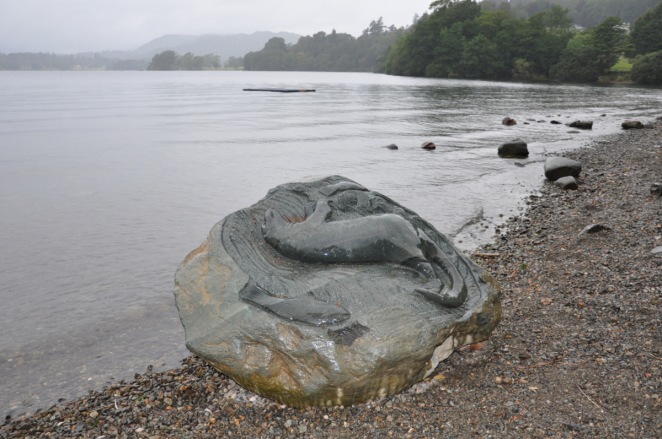 Otter on the Lowwood Sculpture Trail . Maggie B Dickinson and Shawn Williamson

“Through a bi-national training scheme we presented Senator Patrick Lehay with an intermediary sketch model of a fireman, as well as creating a bigger version in Vermont marble for display.”  As a result Shawn and his team received letters of commendation from the White House for their efforts in a difficult time.

Shawn’s involvement with marginalised youths also helped create the massive twelve-ton Herdwick Ram which stands on the former site of Mitchell’s Auctions in Cockermouth, at the entrance to Cockermouth Business Park. In 2004-2005 a team of local sculptors and young folk worked closely with Shawn on the Herdwick design which was funded by Rural Regeneration Cumbria as Arts in the Community flagship. Those involved included Art & Craft Training Team students from Rathbone, West Cumbria Achievement Zone and Weymouth College. Members of the Herdwick Sheep Breeders Association also contributed to the statue’s design which was finally unveiled by Prince Charles, through liaison with the Prince’s Trust for the Built Environment. The Prince also used the opportunity to show his ongoing support for local farmers and companies involved in Foot and Mouth Disease.

It would be tempting – but impossible – to list all Shawn’s works here.  Fortunately his website http://www.lakestay.co.uk/shawnwilliamson/ guides fans to such gems as Lang Sandy, of Rowanburn in Scotland, which he created from Lazonby red sandstone for the Clan Armstrong Trust. It was unveiled by TV news anchor Fiona Armstrong, now Lady McGregor.

A local reminder of his early days with Josefina is the sculpted stone they produced in 1992, kindly donated by Nick Fecitt, managing director of Kirkstone Quarries, which stands outside the Armitt Museum and Library in Ambleside, recording the names of those who have contributed to the Museum’s collections.

“I always remember Josefina’s long and remarkable life and all the things she taught me, especially when I first met her at her Ambleside studio and she wanted to see my art student work. ‘These show great potential,’ she said.  ‘There’s a certain feel to your work; a primitive dynamism as captured by my friend Jacob Epstein.’ And she began to tell me how much she admired him.

“I was staggered.  Epstein was on my top five all-time sculptors’ list.  His work was so alive and sometimes primitive.  It was simply bursting with energy.  The way he modeled clay was as if he’d thrown it on, while bringing it back to life, which was brilliant.  He’d do as many as fifteen studies in an ordinary art-student way, just to get the hang of the features, or the desired look of a head.  I mean, a great man like that treating himself as an art student.  It was real humility.”

Follow the progress of Low Wood’s Sculpture Trail at
http://www.englishlakes.co.uk/low-wood-bay