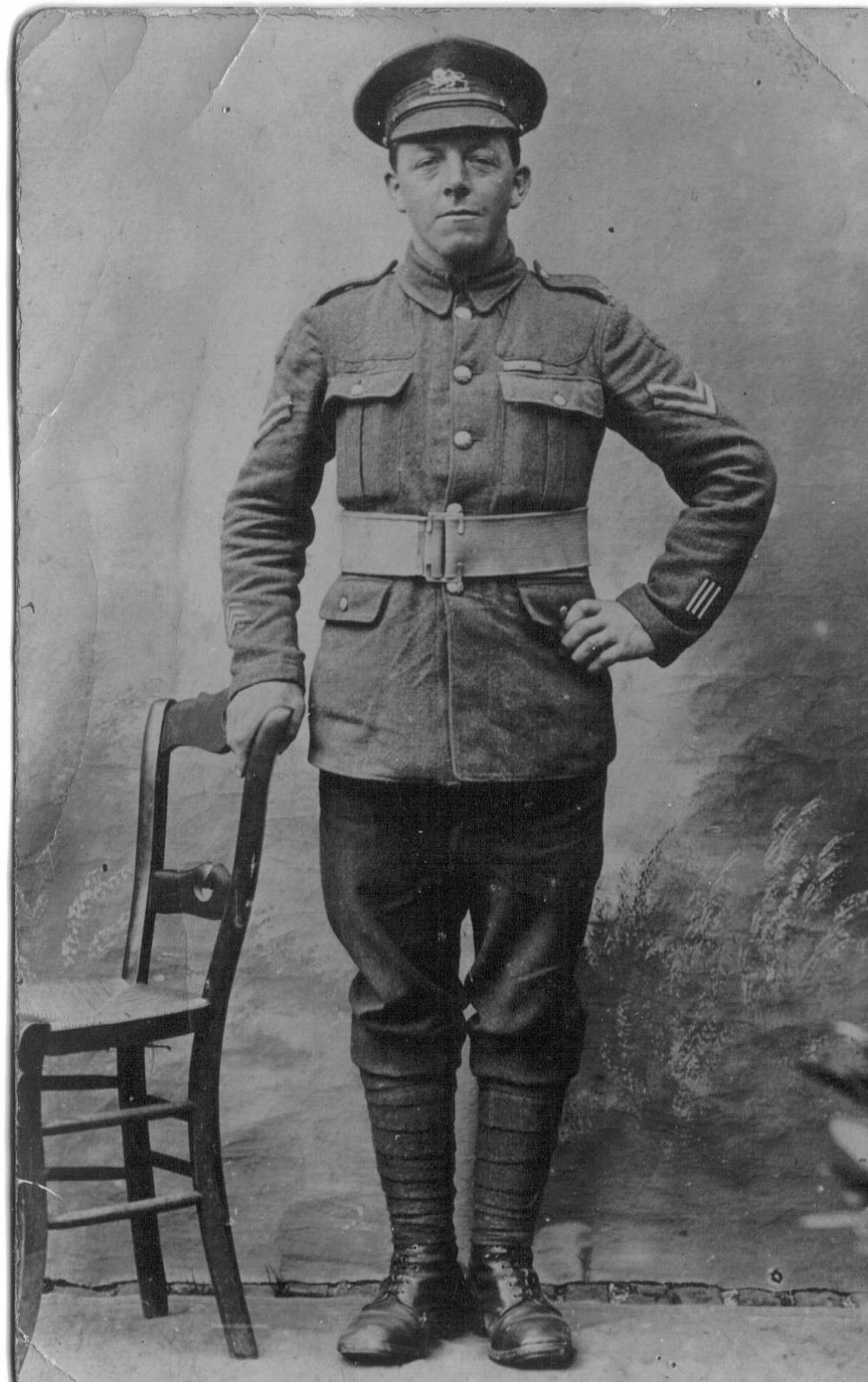 On November 11th 2018 Remembrance Sunday falls exactly one hundred years to the day since the Great War officially ended with the signing of an armistice between the Allies and Germany, at Compiégne in France.

For four years thousands of men had lived in squalid, disease-ridden trenches, squelching through mud and “over the top” to face overwhelming odds against an enemy superior in numbers and ammunition.  Almost a million personnel died and several thousand soldiers were crippled through injuries, and mentally scarred, for the rest of their days. Mustard gas alone affected 200,000 souls.  I can hear my grandfather’s hacking cough yet.

James Hewitson of Coniston was among those brave frontline fighters and one of nine Cumbrians to receive the British Armed Forces’ highest honour, the Victoria Cross, awarded for valour “in the presence of the enemy”.

James was born to Matthew Hewitson and Margaret née Hayton at Thwaite Farm on October 15th 1892, and baptised at St Andrew’s Church. Matthew, who was born in the hamlet of Millholme, New Hutton, worked in agriculture and, in the early 1900s, was the last person to drive the horse-drawn coach service between Coniston and east of the county.

At the outbreak of the war Jimmy, as he was always known, was working on the family farm of Waterhead,  but enlisted on 17th November 1914, initially into the 8th (Service) Battalion King’s Own Regiment, later transferring to the 1/4th Battalion.  He fought at Loos, Armentieres and Passchendale, and was injured at Ypres, the Somme and Messines, each time being sent back to the front line.

He earned his Victoria Cross on April 26, 1918, at Givenchy, in an action which saw him kill sixteen of the enemy.  That day, despite being injured, Jimmy also bore a comrade over his shoulders for two miles to a field hospital.

Jimmy was promoted to Lance-Corporal and awarded the Victoria Cross, ‘The highest military decoration awarded for valour and devotion to duty in the face of the enemy to members of the armed forces.’  It was personally presented to him by King George V at a ceremony in France on August 8th 1918.

The citation published on June 28th 1918 in the London Gazette, read that, “in a daylight attack on a series of crater posts, Lance-Corporal Hewitson led his party to their objective, clearing the enemy from both trench and dug-outs, killing six men who would not surrender.  After capturing the final objective he saw a hostile machine-gun team coming into action against his men and working his way round the edge of that crater he attacked the team, killing four and capturing one.  Shortly afterwards he routed a bombing party which was attacking a Lewis gun, killing six of them”.

Jimmy came home to a civic welcome in Coniston.  The following year he married Lizzie Dugdale of High Wray Farm at St Andrew’s Church.  The couple, who lived at The Forge cottage, had a daughter Dorothy who married Reginald Dodd.  They had four sons and four daughters.

For a while after the war Jimmy coped; but he began to suffer both physically and mentally with bouts of trauma, shell shock and stress.  Then the memories and nightmares took over and for eighteen years he became a patient in Stone House Hospital, Kent, known at the time as the London Lunatic Asylum, suffering with what is now acknowledged and treatable – Post-traumatic Stress Disorder (PTSD). Lizzie visited him regularly, often with their eldest grandson Richard “Dicky” Dodd who was born at The Forge.

As a teenager Dicky was working as errand boy for Coniston Co-op when he was shocked and surprised to see his grandfather walking towards him, in the pouring rain, with a greeting of “How do lad, tha’s wet through.”  Back in Coniston in an easier frame of mind Jimmy worked at various jobs – as an expert hedge-layer, farm labourer, on the roads and grave digging, buying a 1926 Matchless 500 motorcycle with hand-change gears and carbide lights for £47.17s.6d.  It can be seen today  in the Ruskin Museum, Coniston, having been donated by the late Jack Hellen and restored in part by Steve Jenkins, George Tarr and his son Lee who is Jimmy’s great grandson.

Towards the end of his working days he was repairing a road in the Yewdale area when a vehicle drew up.  Its driver was the injured colleague he’d carried to safety at Givenchy who had been trying to find Jimmy for years.  In gratitude he treated him and Lizzie to a holiday in London.

Jimmy had suffered various shrapnel wounds during the war and not all of it had been removed.  Even after several operations pieces were still being taken out of his back and shoulders as late as 1954. He even kept a piece in a matchbox and would show it round when he joined friends in the Black Bull Hotel for his favourite beverage; a lemon dash which was a weak shandy, for Jimmy wasn’t a drinker.

After the end of the war various military paraphernalia was installed in prominent positions in local villages and towns.  Coniston was presented with an unwelcome German field gun, to which Jimmy and his pals took exception.  With the aid of the Gondola it was dragged into Coniston’s Lake and sunk.

On 2nd March 1963, the day grandson Dicky married Nancy Houghey and moved out of The Forge, Jimmy died of respiratory complications following influenza, in Stanley Hospital, Ulverston.  Feverish and suffering hallucinations he called out ‘Passchendaele’ and ‘They’re coming to get me,’ haunted and tormented until the bitter end.

He was buried with full military honours at St Andrew’s in Coniston.  Exactly 100 years after his heroic action at Givenchy, on a bitterly cold April 26th, 2018, his extended family stood at his graveside alongside friends, civic dignitaries and others, including representatives of the British Legion and the Duke of Lancaster’s Regiment to honour Jimmy’s memory.  Cumbria’s Lord Lieutenant, Mrs Claire Hensman, unveiled a commemorative paving stone, inscribed with Jimmy’s name.  Since August 23rd 2014 similar stones have been laid in the hometowns of all those in the United Kingdom who were awarded the Victoria Cross, on the centenary of their actions, as part of a Government initiative to mark the First World War centenary.  In total, 469 stones will have been laid across England, Wales and Scotland and Northern Ireland, as well as another 145, commemorating VC recipients born overseas, in the National Memorial Arboretum, and thirty five in the Republic of Ireland.  The stones mark the enduring legacy of the local heroes, as well as the impact the war had on their communities.

Lord Lieutenant Hensman tells me, “Every village has a memorial to those who gave their lives in the First World War and every year we remember them with thanks for the sacrifices they made. There were also many who returned who had survived but were permanently scarred by their horrific experiences. I am so pleased that it has been possible in Coniston, in the presence of members of his family, to single out James Hewitson for his exceptional courage by the unveiling of a special plaque marking the centenary of the award of his Victoria Cross.

“It is important to me that the last four years of commemorations have raised awareness and appreciation that  the freedoms which we  tend to take for granted  were bought  for a high price though the  selfless  heroism of  young  men such as James Hewitson VC.  We should remember them.’